Wow was this ever hot! Scroll to the bottom for another video of it in all its glory!

I have seen some pretty crazy fires in my day, from raging bush fires to burning stacks of old college couches. But I can honestly say without a shadow of a doubt that this bonfire beats them all. Believe it or not this bonfire was right in the middle of downtown Belfast Northern Ireland. In fact the Days Inn hotel faces the parking lot where this bonfire takes place. Check out the pic below and you can see the Days Inn sign if you don’t believe me. 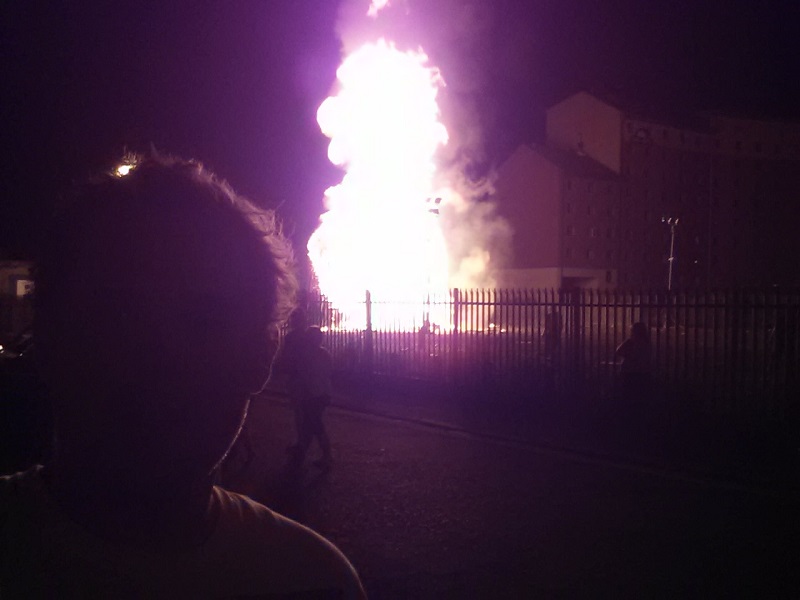 I wonder if there are people in those rooms?

Crazy right? I am pretty sure the Day’s Inn probably does not make those rooms available for this yearly tradition. By the time the bonfire was this big I could barely stand where that pic was taken it was so hot. So why was there a fire this big in downtown with no fire trucks putting it out? Well every year on July 12th there is a festival called Orange Fest that takes place to celebrate the victory of Dutch Protestant King William of Orange over Catholic King of England James II in 1688. TRAVEL WARNING this is not the best time to be in Belfast as it is the most politically and religiously charged weekend of the year. This past year the riots were the biggest they have been in 10 years and I was smack in the middle of it. So back to the bonfires which actually have nothing to do with the riots. On the eve of Orange fest people gather together in parking lots and fields all over the city to start the Orange Fest festivities. Bands are playing, drinks are pouring, fireworks are being set off and off course the bonfire is lit! If you watched the video you will actually see I started recording right as it the bonfire was being lit. You can actually see guys throwing Molotov cocktails at the stack of crates to get it started. There is even one guy throwing gas from a large container on the fire and then running away, which is absolutely craziness! I mean I have thrown gas on a fire but directly from the jerry can and then run away with it still in my hand real fast to hope it does not catch on fire. NEVER! Later on I managed to get another video of the fire at almost full burn. Check it out below. PARENTAL WARNING I SWEAR IN THIS VIDEO.

I really do apologize for swearing so much in that video but man that is exactly what it was, just one crazy m**herf****king bonfire. Do I recommend going to see this for yourself? Not really but I was with a large group of international hostel goers so we were pretty safe. In fact on the night of July 12th our hostel just threw a big party for all the hostels in the area to make sure we are not out in the city. If you do end up there on this weekend just be safe and be a silent observer of this politically and religiously charged festival.

My top 10 travel videos from people around the world